Well, that’s all folks. From the looks of it, we have just witnessed the death of Subway’s $5 Footlong. As inflation ate up franchisee profits, it was only a matter of time until the $6 foot longs and $6 meal deals took over.

Now, instead of offering a special $5 dollar foot long for November, Subway restaurants has announced the “Simple $6 Menu.” Which seems exactly like their combo meals before.

Basically, the Simple $6 Menu includes since of the most popular six-inch subs and includes chips and a drink for $6.

The included subs are:

There is no indication from Subway if this is a special November deal, or is going to be permanently on the menu. I suppose it all depends on how well it sells.

I personally only went to Subway for the $5 foot-longs, and now that those appear to be gone, I might only return for pastrami. 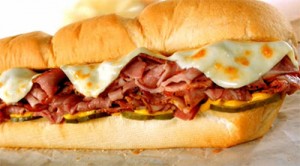 What…what is that? Subway is also bringing back the Big Hot Pastrami Sandwich? Never mind then. For a limited time, the pastrami sandwich (which is usually about $8) will be back. It is delicious, and comes with the regular veggies.