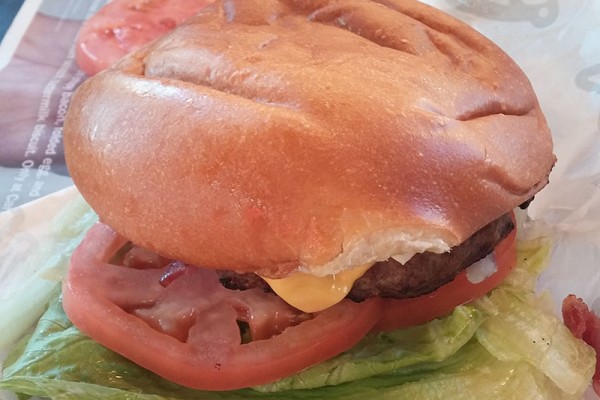 
If you watch any TV lately (and for me it has just been college football on ESPN), you have undoubtedly seen the innuendo-rich tongue-in-cheek ads for Carl’s Jr latest messy burger concoction known as the Mile High Bacon Thickburger.  The difference between this version (which comes in both 1/3 and 1/2 pound patties) is the huge mound of chopped bacon just below the bun.

When I ordered this, I had just come from Burger King for another review, so I was glad that they only had the 1/3rd pound available for $5.99.  (The 1/2 pound is $6.99).  There are some great things about this burger, and some things I wish were different.

First of all, it is huge.  I’m used to value menu burgers, so obviously I’m not quite used to something this size.  I’d compare it more to something you’d get at Red Robin.

The bun was nice.  It is more like a large roll that has been cut in half.  Carl’s Jr. toasts the bun on both sides brings a great crunch, however I wish the bun kept its shape.  There is so much oil coming off the patty, combined with the mayo, and melted cheese, that the bun on both sides was soggy.  It also didn’t hold its shape at all and just got mushed into a pancake. 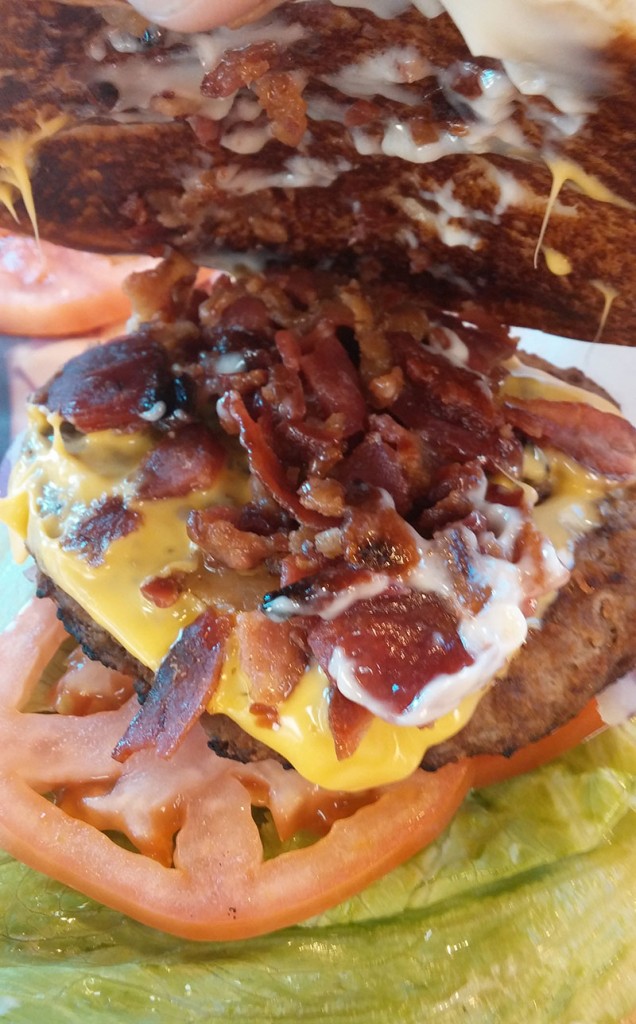 Under the hood of the Carl’s Jr Mile High Bacon Thickburger.

The bacon itself had a fantastic flavor, and was extremely high quality with very little fat.  As you can see in the picture, the bacon itself is chopped and put into a mound right above the patty.  While the chopped bacon does give a unique texture to the overall burger, I would have preferred a couple of full bacon strips instead, mainly to just add structure to the burger itself.  The bacon did also tend to slide out from under the bun.

The 1/3 lbs patty was thick, juicy, and flavorful.  The patty is very hearty and very filling, and the cheese and bacon and the rest of the elements really worked well together.

The tomatoes, pickles, and lettuce and onion were thick, and very juicy as well.  Actually I would have preferred them thinner, and there were a couple of bites that seemed to give off way too much onion, or tomato.  As you can tell from the picture, there are a lot veggies.  I might be nitpicking a little, but I would have preferred the vegetables to be spaced more evenly through the burger.  It sort of felt like the meat on the top was doing its own thing, while the veggies on the bottom were having their own party.  Some bites seemed full of veggies, while some completely without.  More balance would have probably kept the burger more intact while adding different layers of flavor.

Hunger Filling Grade: A – On a not so empty stomach, I could barely finish this.  It is just as much (if not more) burger than you would get at a sit down restaurant.

Value Grade: B- I think $5.99 is a lot to pay for a fast food burger, but with so many different elements involved and its size, it is probably worth it.

Bottomline – Other than being a little “drippy” and making the bun flat and soggy, this is a pretty solid burger.  It is fully loaded and very filling.  Although I would change a few things about it, the Mile High Bacon Thickburger has excellent flavors. 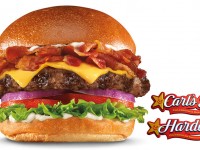 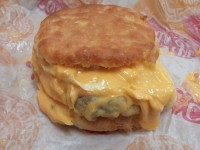 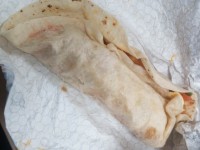 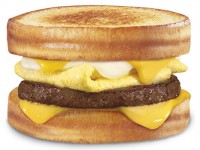 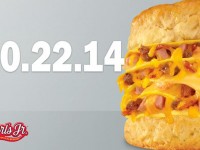