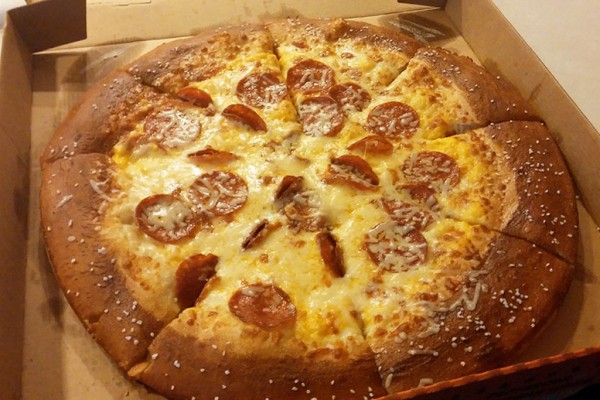 
Back in college, Little Caesars was one of the most popular places in town. It seems like every school activity would have a stack of $5 Hot and Ready’s and we loved it. In a marketing class, we called this kind of pizza “gut fill pizza” as that is exactly what it did. Little Caesars knows their audience, and satisfies them well. I have since “graduated” to a little more fancy Papa Johns, Pizza Hut, and Dominos, and haven’t been back to Little Caesars in quite some time. This is where I start my review of the Soft Pretzel Crust Pizza.

The pizza dough seems to be made from pretzel dough, at least it has that flavor. The whole thing is really salty (not including the actual pretzel salt added to the crust). There is no marinara pizza sauce, but instead a cheddar cheese sauce, topped with a four cheese blend including mozzarella, asiago, fontina, and parmesan. It is also topped with thin pieces of pepperoni. 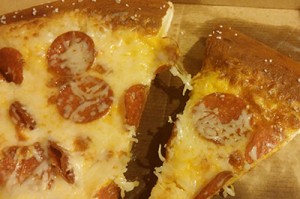 On first bite, you definitly taste the cheddar cheese sauce. It tastes like pretzel dipping sauce. The bread is nice, not too thick or thin, and has a great consistancy. The crust is quite a bit larger than a regular pizza. It is coated in butter and sprinkled with salt.

It tastes more like a soft pretzel than a pizza. The few pieces of pepporoni don’t add much to the flavor. And, as I mentioned already, the whole thing is really salty. I actually had to scrape the salt sprinkles off the crust just to bring a little balance.

The cheesy portion of the pizza is delicious, if you can get past the salt. It tastes like pretzels dipped in nacho cheese. The crust leaves much to be desired. It isn’t really “pretzel” flavor, and not really pizza crust. It is just kind of flavorless bread. I think it would have been better with a side of dipping sauce to dip the crust in, but nothing like that was included.

Hunger Filling Grade: A – I was only able to eat about two slices and was done.

Value Grade: B – There is a slight premium on this over getting a regular Hot and Ready pizza. I feel overall, it was worth it, although I’d like to see what a bigger industry player could do with better ingredients. It still felt like cheap “gut fill” pizza.

Bottomline – I was expecting a regular pizza with a pretzel crust. I got the opposite. A very pretzel tasting pizza with a regular crust (with salt). It was tasty, although $6.00 tasty. My wife actually liked it much more than regular pizza, but she isn’t much of a pizza sauce fan. If they would have added dipping sauce for the crust, this would have been a big win. Right now, it is just “good.” 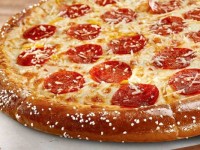 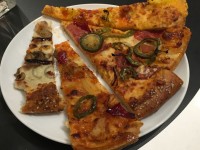 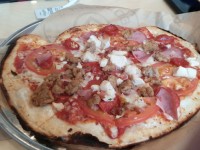