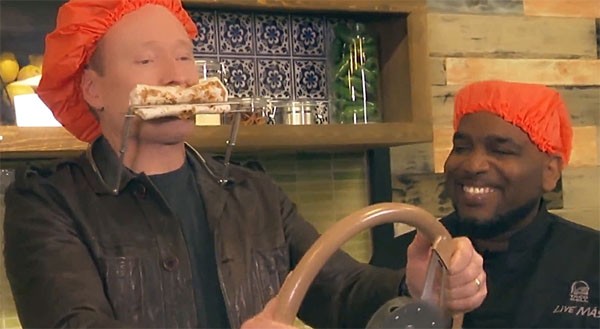 
On a recent segment on Conan O’Brien’s show, he took one of his Taco Bell loving staffers to the Taco Bell test kitchen at Taco Bell HQ in Irving, California.

In the hilarious clip (whether you are or aren’t a Taco Bell fan), Conan takes us through the kitchen and we meet some of the taste testers.

In the final part of the clip, we are brought to the “Innovation Kitchen” where we get our first glimpse of the previously identified “quesalupa” which is a combination chalupa and quesadilla.

Conan then acknowledges how good Taco Bell has been using a taco shell and tortilla shells, but mentions them overlooking “the most time-honored food-delivery systems around, the ice cream code.” He then fills the code with beans, cheese, and other Taco Bell staple ingredients to create “La Cona.”

Also in the innovation kitchen, Conan mentions that it would be easier to eat burritos while driving with a hands free device that looks similar to a harmonica stand.

Finally, Conan creates what he calls the “Irish Taco” with mashed potatoes, cabbage, corned beef, and drenched in Guinness and finally grilled.

You can watch the entire clip below: 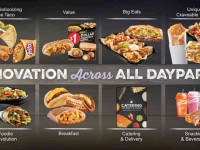 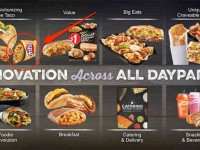